KS Organizer is an yet another "Personal information manager". 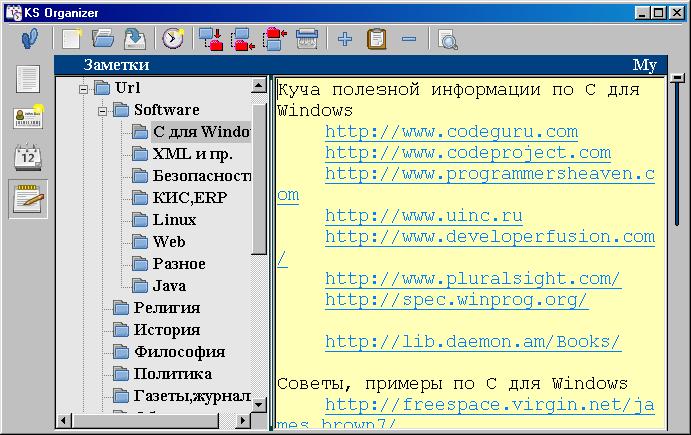 There are many programs of this type, including freeware. But, as usually, no one of those programs suits my needs fully. Some are uncomfortable in use, another one hasn't language support ( other than English ), yet another hasn't some necessary functions ...
I didn't want to reinvent the bicycle, but this appears the only way for me. Not all features, which I had planned, are realized yet, but the sources are in my hands - so the implementation their implementation and further development is a question of time only.

Current version includes 4 modules: "To-do list", "Address book", "Calendar" and "Notepad".
The appearance of each of them ( fonts, colors ) are tuning separately.
The interface language may be configured also.
All settings are kept in the ksorg.xml file, which is located in the program directory. So, you can use several copies of the KS Organizer, each one with a separate settings; or keep it on a removable data medium.

Each module has it's own sections list, which is representated as tree. For the "Notepad" this tree serves as table of contents. You may build this tree due to your needs.

For any record in modules "To-do list" and "Calendar" you can set the alarm - in defined day and time it will notify you about appropriate event.
Also, the alarm may be set independently of these modules. The appearance of the alarm's message may be accompanied with selected sound or with the MS Agent assistant, if it is installen on your computer. If the SpeechApi is installed, this assistant will speak the predefined text.

You can limit access to your data - encrypt the whole data set or any it's section. Encrypting uses Blowfish algorithm, which is known as very strong and is used in many critical programs, including Linux kernel.

It is important for the program that the computer local time being correct, so there is a special function - correcting the local time via Internet.

It is possible to export the "Notepad" data ( or any it's section ) to the XML file, it is possible also to import to the "Notepad" from that XML file. This feature allows you to exchange information with other users of "KS Organizer".

There is yet another useful feature - the possibility to use plugins - additional scripts, written on Clipper / Harbour.

The version 2.0 has been released after a long period of time, because I hadn't spare time enough to prepare this release - the code was ready few months ago, I modify it from time to time due to my needs. There are many changes since the 1.2 version. The first what you will see is the new interface. Pay attention to the absence of a main menu line, the menu is calling now by pressing the leftmost button on a toolbar. Significantly extended appearance of events in the Calendar section - look at the 'on the Shedule' option. Added possibility to keep photos in the Address Book section. And some other changes, which I don't remember already...

The 2.1 has been released after a longer period of time :). The main innovation is that all options are kept now not in the Windows registry, but in the local file ksorg.xml - this allows to have the program portable. The data access engine is changed, what helped to put away two dll's. Added possibility to hide unnecessary modules and the panel of modules ( that one at the left ). The list of available national languages has been extended.